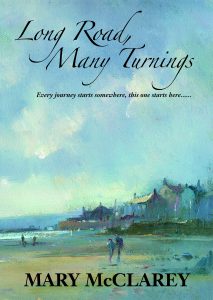 Long Road, Many Turnings is a family saga spanning four generations. It is a book for anyone who ever wanted to trace their ancestry and discover how their family really lived throughout the first half of the 20th Century.

Although this is a work of fiction, I have retold my own family story here, achieving a mixture of drama, humour and historical events. Exploring scandal, heartbreak and danger through interrelated characters – we are introduced to Roisin and Deirdre in 1907, Kitty and William between the wars, then Ellen and Eddie experience WWII on opposite sides of the UK before the enigmatic Agnes brings the family together in 1951. This book immerses the reader in life across Ireland, both north and south, London and Wales.

Those chapters which include the Second World War deliver story-lines focusing on very different aspects – childhood evacuation to Wales and lorry driving for the American Army in Northern Ireland, because I wanted to illustrate war’s unexpected impact on everyday life. Of course the chapters depicting the post and interwar years were also fascinating, as they were times which had their own challenges. Each character’s story intriguingly slips into the background of the next thus the readers are constantly provided with fresh themes and new characters.

Here are a couple of Reviews.

‘This is a great family saga, like the road in the title, it is full of twists and turns. The characters are feisty and interesting but there is enough of the social history woven into the plot to lift this book above many similar stories. The locations are beautifully described as are the historical events that take place. This is a heartwarming novel, written with humour and sensitivity, highly recommended!’

‘Long Road, Many Turnings introduces a number of strong characters – first Roisin and Deirdre, later Agnes. Mary’s craft smoothly consigns each of these – and other – characters into the background of the next story. If anything, perhaps the plot changes a little too quickly at times, resulting in a chapter ending and the story moving on just as I was getting interested in a character.
The tale is set up to continue; has Mary a sequel up her sleeve?’

Well, I’ve just finished the sequel now, it’s called ‘Time for a Change’ and it takes the family story onto a whole other level! More about it on the next page. I hope you enjoy it.

The first edition of ‘Long Road, Many Turnings’ has now sold out.

It has been rewritten, and is  available via Amazon, or from me of course! Email me marymcclarey@gmail.com for a signed copy. ( Free P&P within UK.) 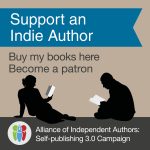