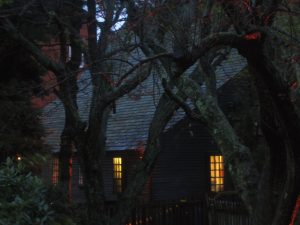 Halloween in Salem. Doorsteps decorated with grinning pumpkins and lanterns shrouded in cobwebbed netting facelift the town. The heads of scantily clad partygoers are topped by witches hats, offering some protection from an evil, biting wind. Copper leaves swirl in the afternoon breeze, mingling litter and empty coffee cups with nature’s own debris.

Ghostly blues and gravestone greys colour the clapperboard houses, emitting an air of solemnity in stark contrast to the carnival atmosphere building all around. Those who tramp and commandeer the streets in flowing black or purple robes, vary in costume. Some heads adorned with red horns, others wearing top hats, funeral style, all seem to be nodding at the darkness of All Souls. They send a shiver of foreboding though me.

I hurry to get downhill, towards the harbour, before the light fades.  I can’t take my eyes away from those partygoers, predominantly women, who engulf the wide spaces, tumbling over one another. They resemble more hen party than a coven. But still, the foreboding persists. A black cat, yawns, turns yellow eyes to stare at me before nonchalantly crossing my path. Above my head, a creaking signpost ‘ Gont Funeral Home’ sways in the breeze. But there is no breeze, the leaves are not swirling here. Three floors of unlit windows face Hawthorne Avenue. Was it was once owned by a Yorkshireman, the apostrophe long since dismissed?

This town is famous for its three hundred-year-old history of witch trials. The world is well used to mass hysteria and religious extremism, and it’s no surprise that it caused the deaths of fourteen women and five men, but it does seem unjust that such a bounty of commerce should be its reward.

Whatever we are used to, the story of motherless Dorcas Good, a four-year-old witch, imprisoned then released to perish in the streets of this town, is hard to understand.

Perhaps she was in the crowd watching when eighty-year-old Giles Corey was crushed, pressed to death, by heavy stones for refusing a trial. I shudder, hoping that the fate of the very old and the very young has improved in three hundred years as I follow the tourist trail to the shorefront, wondering whether evil can linger.

Down by the harbour, once the oldest seaport in Massachusetts’s Bay, wharfs and warehouses have become  museums, others are advertising  palm reading or an invitation to séance.

Many more of the gardens are decorated here, with animated scenes of beheading, drowning and skeletons rising from the grave. This part of town has an eerie, Disney- like feel to it as the gloom deepens. A low mist comes up from the harbour and softens the outlines of the vehicles as I approach the car park to meet my partner.  I greet him, hugging close, more in relief at his being here than I care to admit. ‘ Has Halloweeen spooked you honey? ’ he remarks, his head turning towards a black hearse which has just arrived alongside us. We cease the smiley cuddling, turning grave and sympathetic. ‘ I’ll move the car before the mourners arrive, Sue.’

Before we can take action the long black vehicle glides to a respectful hush beside us and we see a small dog, a terrier wearing an orange sequinned coat, paws on the dashboard, watching from the front passenger seat.

Climbing down, the driver, in black mourning suit, looks unexpectedly cheerful. ‘Oh, we love Hallow’een. Booked this hearse  a year in advance.’ We don’t know how to respond to this unasked-for  information, offered while grappling in the passenger well for the glittering sequinned animal, tucking it under his arm.

The woman who appears from the other side of the hearse wheels a smart pink suitcase which keeps getting tangled in the hem of her long black gown. Made up like Morticia  Adams, she’s clutching her witches’ hat to her head, the long purple strands of her wind-whipped hair smacking across her Goth white face.

‘He only got halfway through building the coffin when we had to leave, but we can use it next year,’ she tells us. I still can’t think what to say but He manages the ‘Happy Halloween’ with a poker straight face.

Later that evening we mingle in the hotel foyer with Bishops, Witches and mini-skirted Skeletons. Such a frivolous juxtapositioning of costumes makes me feel less spooked than I was earlier in the day and now I’m just open-mouthed  curious. He is embarrassed by my behaviour, desperate for me to stop staring.’ Please Sue, it’s rude to stare, although maybe that is the least they should expect. It costs a lot of money to look that cheap.’ He’s a big Dolly Parton fan.

Outside, the streets are crowded and we decide it is time for us to join the festivities. Holding greasy cartons of American carbs, fries and hotdogs, we are swept along towards  “moonlight ghost tours” and “ graveyard visitations.” All around us raucous tour guides, proud bearers of tall pikes swinging battery-operated lanterns, urge us to follow for the experience of a lifetime.

I’m keen to have the experience of a lifetime, so we pay $5 to the tour leader and fall in line. We’re joined alongside by a small plump girl laden with Wal-Mart carrier bags. She smiles shyly and greets us ‘ Happy Halloween’, through a tangle of orange and black hair which matches her tights. She looks like a cross between a shopper and a bumblebee, but perhaps that is all part of how they do Halloween here.

This tour is a novelty for us. We usually avoid those guides with flags who, stopping before inconsequential buildings, give us unnecessary facts, causing precious holiday minutes to drizzle away like sand in an egg timer.

But I don’t want to wander off on my own to explore here. I need to be with a group. We walk past the cemetery and stop in front of the Salem Witch Trials Memorial, where our guide tells the tale of witchcraft trials and subsequent hangings. It sounds bland and too well-rehearsed for my liking.

Bumblebee girl and himself move ahead slowly but I edge towards the pillar engraved with the names of those who perished.  A young woman stands between me and the others. Her head is concealed with a white cap and her floor-length dark dress accessorised by a white wrap over shawl. Looking more early American Quaker than Witch.  I wonder whether she will soon be joined by a Bishop or a Red Horned Devil.

I smile tentatively, anxious not to appear rude, and greet her with what I think is the convention ‘ Happy Halloween’, but I’m not really inviting conversation. She turns her head and I notice crooked teeth, some missing, and cracked lips set in a pallid face.

‘Wait,’ I gabble. ‘Let me write it down. Tell me again.’ But when I look up she is slowly walking away. ‘Help me, Susan,’ I hear her repeat. Himself is beckoning me and I think that if I don’t join the group, I’ll be lost. ‘Did you see that woman?’ I ask. ‘She called me by my name.’

‘What woman? I’ve had enough of this twaddle, Sue, I’m off. Shall we get a beer?’

The  wide-open double doorway of the nearest hotel looks welcoming and it doesn’t take long to elbow our way to the bar, where we order our Halloween spirits. Settled on a red padded vinyl armchair, I reach into my bag for the tour guide’s information leaflet.

Mary Eastey was hanged on Burrow Hill, for witchcraft. I look up and see Bumblebee girl and the woman who spoke to me at the memorial standing in the doorway looking at us. My hand is shaking as I reach for my drink. Who are they? How did that woman know my name? Have I let her down somehow? Was it a prank? I don’t care to ask, or share, that information. I think He has had enough Halloween for one day.

Late into the night, screeches of hilarity and hysterical cries, alongside the hooting of many human owls, make sleep impossible.  By two in the morning we feel as though we have turned to ashes. The night porter, undoubtedly a good soul, calls for order. A deathly hush descends. ‘They must of hanged ‘em’ he remarks , rolling over and achieving the sleep of the righteous.

Mary Eastey was hanged for witchcraft in 1692, as was her sister Rebecca Nurse. A mother of eleven children, her parting words to her family have been reported as “as serious, religious, distinct, and affectionate as could be expressed, drawing tears from the eyes of almost all present.” She was hanged along with several others and on the gallows she prayed for an end to the witch hunt.
Mary Eastey’s last petition to the Court, of which it has been said that no more moving document has ever been addressed to any judge follows: “I petition your honours not for my own life for I know I must die and my appointed time is set but the Lord he knows it is that no more innocent blood be shed…..the Lord above that is the searcher of all hearts knows that as I shall answer at the Tribunal seat I never knew the least thing of witchcraft”.[5]
In November, after Eastey had been put to death, a young girl Mary Herrick, gave testimony about Eastey. She claimed she was visited by Eastey’s ghost, who told her she had been put to death wrongfully and was innocent of witchcraft, and that she had come to vindicate her cause. Eastey’s family was compensated with 20 pounds from the government in 1711 for her wrongful execution. Her husband Isaac lived until June 11, 1712.